Identification of Drugs for Axon Growth and Chemotherapy-Induced Peripheral Neuropathy 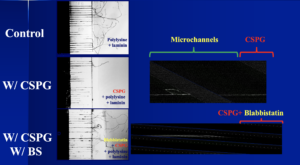 The purpose of this research is to identify potential drugs that induce axonal growth as a form of neural regeneration. Axonal injury causes glial scarring to occur, provoking an influx of CSPG around the injured area. CSPG, therefore, inhibits the growth of axons near the site of injury. Blabbistatin, a non-muscle myosin II inhibitor, has been shown to promote growth over CSPG in in-vitro models. It is important to understand how Blabbistatin affects the axon, so a microfluidic device (Figure ) was created to test the effect of Blabbistatin on the axon, and the cell body independently. It was found that axon growth occurs when both models were tested. Blabbistatin is, unfortunately, a very toxic chemical, this result showed that axonal growth can be promoted directly at the site of injury, reducing any damage that could be caused.

One of the many side effects caused by chemotherapy is; Chemotherapy-Induced Peripheral Neuropathy (CIPN). CIPN is a degeneration of an axon from the synapses which many times does not cause cell death. At the moment there are no treatment drugs for CIPN. The main drug responsible for this degeneration is Paclitaxel (Taxol), research was done to see how the drug affected the axon and cell body independently using the same microfluidic method as previously discussed. Fluocinolone Acetonide (FA) was added to the Taxol experiment and was found to have some effect, limiting axonal degeneration. 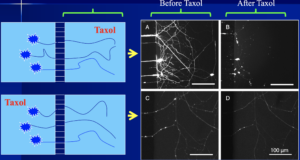 25nm of Paclitaxel is administered into the soma compartment and axon compartment respectively. DRG neurons are stained with Calcein AM 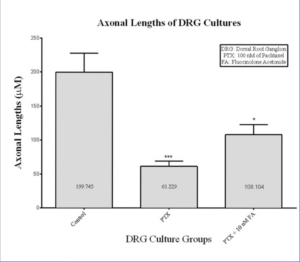