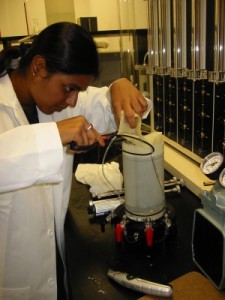 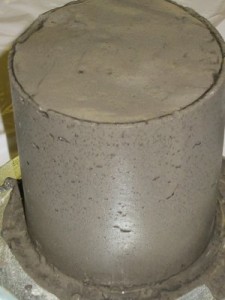 Over 62 million tons of fly ash is annually generated in the U.S. alone from coal-fired power plants. Class F fly ash has been of very little use and has been typically disposed of in landfills at a significant cost. The key objective of this research project is to find alternate markets for re-use of the waste material. In this research we are conducting compaction tests, hydraulic conductivity tests, shear strength tests, and leachability tests on Class F fly ash with and without montmorrilonitic clay mixed at various fractions. The tests conducted so far indicate that addition of montmorrilonite to fly ash can reduce the hydraulic conductivity of fly ash to below 10-7cm/s. Thus, making it potentially suitable for environmental hydraulic barrier applications such as landfill liner, landfill caps, and vertical cutoff walls. We are also investigating the effect of montmorrilonitic clay on binding heavy metals such as boron, chromium, arsenic, and selenium that are typically present in most fly ash samples.